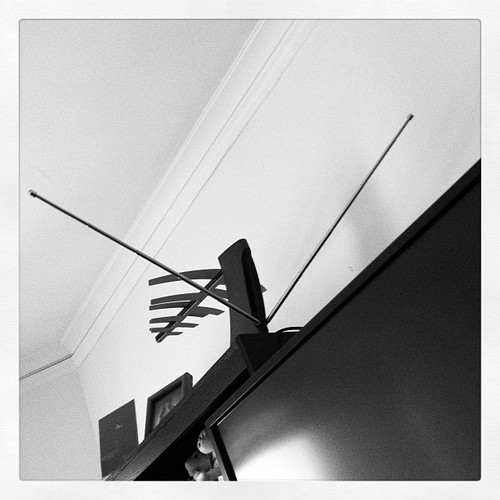 Apparently crafty runs in my family.

On a visit with my brother I noticed his TV was running off of this funny thing with two long metal tentacles…. 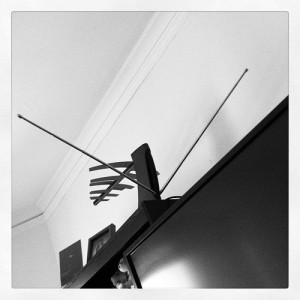 We’ve been wanting to ex-communicate cable from our household for awhile, but going down to basic service means losing the HD picture on our very (very) large TV.  That kind of defeats the purpose, so Crafty Bro recommended this beautiful little contraption to pick up the main stations with a crisp HD picture.

Add in a little Hulu and Netflix and it’s all the TV you could want for about $20 a month (plus a small investment up front for the antenna).  I’m not selling out my blog and advertising for Hulu; I’m just seriously excited by the opportunity to stick it to the cable company and still be able to watch Top Chef in HD.

The downside?  If there is one it might be that you can’t record anything to a DVR, so if you want to watch TV live it will be on the major networks with commercials.  That might not be so bad, since I tend to either do pushups, dishes, or both during commercial breaks.

Or it might just mean that I watch less television, which wouldn’t be bad either.

So here’s where I get to my next point.  I was watching CBS for the first time since, oh, 2003 and came across The Price Is Right.  No more Bob Barker; no more Rod Roddy, but same old Price Is Right.

…until dream boat Rob Wilson (the first ever male model on the show) struck a pose and pointed an enthusiastic thumbs up towards a home theatre set in the showcase showdown.  After I picked up my jaw from the floor, I thought ,“Rock on, Price Is Right!  Go on with your bad self.”

I don’t know who’s idea it was to be fair about who can and can’t promote a blender and a trip to Fiji on television.  Maybe this is Drew Carey’s version of having your pets spayed and neutered.  Either way, CBS making the choice to start objectifying both sexes is a darn good one, and a decision that I hope will pay off for them (especially since it’s one of the five channels I’ll now be watching).

2 thoughts on “How I kicked cable out of my life, and a realization about The Price Is Right”