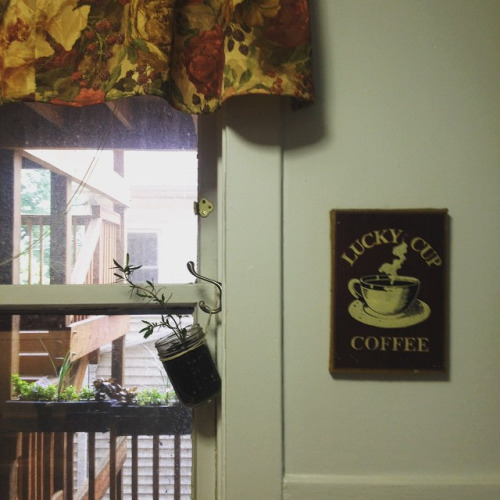 I’ve had my fair share of epic domestic fails, particularly when trying to recreate things that I find from Pinterest. I think I can be pretty capable in the DIY department, but, you know, Pinterest forces us (or at least me) to set unrealistic expectations about what is actually DIY-possible.

We moved into a slightly bigger apartment a few months ago, and it’s been fun to get to settle in and figure out where things go. Our kitchen is bigger, with a huge butler’s pantry. It’s the Ritz Carlton of kitchens, as far as I’m concerned, and I’ll tell you more about that later. We’ve also now got a nice big deck, and I managed to plant some flowers out there this summer. The only problem is, the deck is shaded 90% of the time, so, not ideal for growing herbs and veggies. I’ll tell you more about that later, too.

I’ve pretty much given up on the idea of community gardening, not because I don’t believe in it, but because I’ve spent the last two summers paying $75 to watch a bunch of vegetables die. Even though our garden was only a mile a way, getting there was hard, because, life. When I was able to go, there was this walk of shame past all the beautiful, bountiful beds to our pathetic little patch filled with green beans, three strawberries, dead tomato plants and a bunch of weeds.

Anyway… where was I? Right. DIY.

Knowing that I a) wasn’t going to plant a community bed this year, b) don’t have any sun on the deck, and c) am leaving the country for five weeks of prime growing season, we opted for a different gardening philosophy this summer. There’s a nice big window in the kitchen, and if I care about growing anything, it’s fresh herbs. So then, Julie came across this:

I should reiterate… this was all Julie’s idea. What a catch.

Knowing my history with recreating things I find on Pinterest, I was a little worried. Fortunately, it was easy enough to do that it would have been really hard to let Julie down. We chose sage and rosemary (purchased from some of our favorite farmer friends Midnight Sun Farm) because they are relatively hard to kill and Julie doesn’t like basil (I know…).

To make this little window garden all you need are coat hooks and hardware, mason jars, kitchen twine, potting soil, and herbs plants or seeds.

One thought on “I did a Pinterest thing that didn’t totally suck.”