The ride down to Devil’s Tower from our chateau in the Black Hills demonstrates one of the most dramatic changes in landscape I’ve witnessed in two hours of highway.  One minute high in the trees and rocky hills, with the snap of a finger you find yourself on the barren plains of Cattle country almost immediately on crossing the South Dakota/Wyoming border.

But in the middle of the desolate and dry landscape of Eastern Wyoming, there’s an anomaly.

Unlike its fellow national monuments of bronze and stone depictions of dead presidents, Devil’s Tower is not contrived by men.  There was a placard somewhere along the 2+ mile hike around it that said something about molten lava and volcanoes, but I like the Lakota legend better:

Seven sisters were out playing when a bear started to chase them.  They climbed on a rock and the spirits rose the rock to the sky, where the sisters were turned into the constellation Pleiades.  The bear scratched and clawed at the rock, but was unable to reach the top. 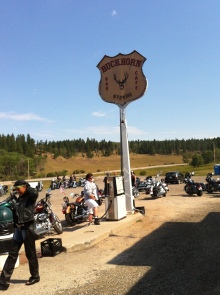 It’s hard to explain the gravity of a place like Devil’s Tower, but even more profound are the thoughts that come with a solid four days of moving Westward. People historically moved West for freedom, space, and opportunity.  They were motivated by gold, coal, oil and land, and maybe they still are.  Whether it’s gold or a job at Wal-Mart that pushes Americans Westward, I was starting to lose hope that there were still open spaces in this country, in spite of its size.  I live in a constant state of claustrophobia, seeking Starbucks after Starbucks, with people living literally on top of one another and paying the highest prices for the least amount of space.

But after a pit stop at the first and last gas station on the way from Devil’s Tower to Gillette, WY, there wasn’t a Starbucks in sight.  In fact, there wasn’t a single building – or even a vehicle for that matter – as far as the eye could see.  In that moment I’ve never felt more vulnerable, or more free.  I imagine it’s as close as you can get to witnessing what it was like for those first settlers moving West over the open prairie in search of, well, nothing…

…and actually finding it.