It was a lofty goal to try and blog every day for twenty days, and I got half way through without wavering. An uncommonly busy Monday (and Tuesday, apparently) threw me off course and so this is me making up for lost time.

I mean, who wants to listen to me yammer on every day anyway?

Hopefully you forgive my negligence, and will accept this little list of some of my very favorite posts as an apology: 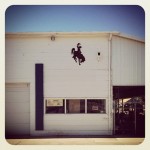 Small Town America Through the Eyes of Waldo, FL.

Through a series of unfortunate events, I’ve endured a couple casualties over the past two weeks.  I’ve been worm-sitting for the Glenwood Sunday Market, and am sad to report that not everyone has enjoyed their stay with me…

In short, I killed them.

Ok, well, let me preface that with the fact that many of them are doing just fine, but I crammed them all in close quarters knowing full well that they were too crowded, and a few days later there were dried runaways on the countertop and a not-so-nice smell coming from the bin.

Then Nancy put the bin outside in really hot weather (she does not have an appreciation for smelly worms).

All I have to say is, that Darwin guy was pretty smart with the whole natural selection theory, and bravo to the survivors who weathered those storms and are still alive and kickin’.

Moral of this story:

Even Master Composters screw up and kill worms sometimes.  The only difference is that we know why we killed them.  And we’re good at making worm babies to make up for the loss.